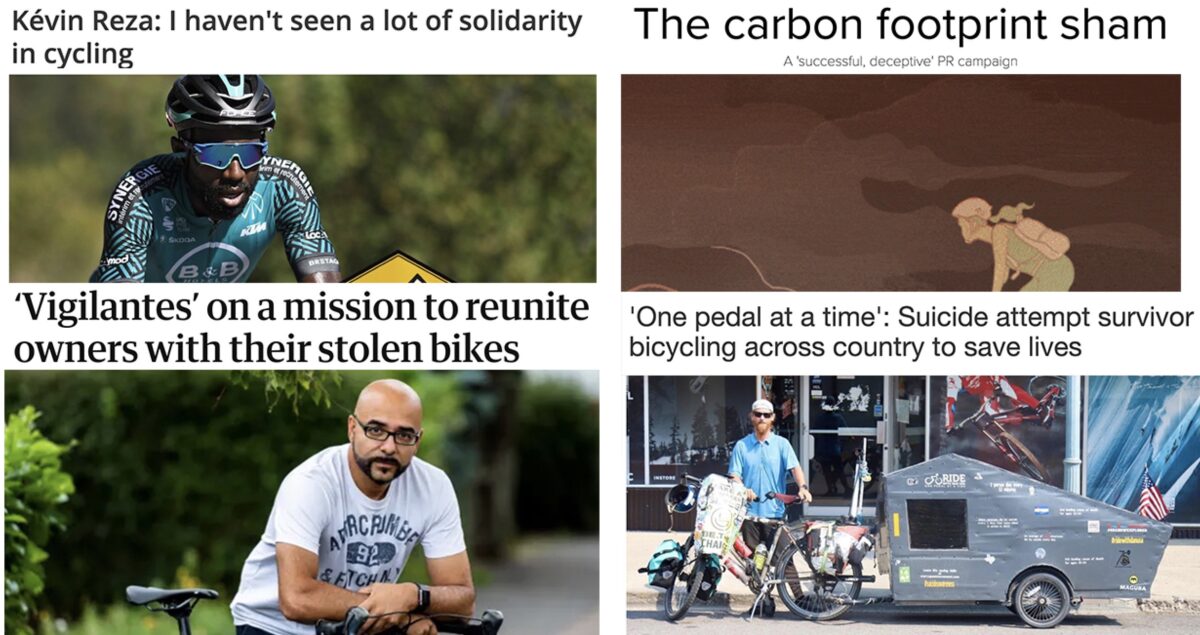 Welcome to the week.

It’s not your fault: The concept that all of us have a “carbon footprint” is nothing greater than “devious” propaganda pushed by Large Oil to disgrace and distract us for his or her environmental destruction says this Mashable article.

Primed for e-bikes: Current staffing strikes trace that Amazon might be looking to bulk up its use of electric bikes for last-mile deliveries.

Commons sense: Boston joins Paris as one of many newest metropolis to make protected bike lanes created for the pandemic, permanent.

Race within the race: Frenchmen Kévin Reza, the one Black man to compete within the 12 months’s Tour de France, tells CyclingNews that he doesn’t feel solidarity in the professional peloton — even after two incidents of racial abuse from different riders.

Not driving, nonetheless charged: The one who was behind the wheel of a “self-driving” Uber automotive that hit and killed a lady crossing the road on foot in 2018 has been charged with negligent homicide. The driving force was reportedly watching TV on her cellphone when the collision occurred.

Indoor domination: Within the newest signal of recognition for indoor driving, software program platform Zwift inked a $450 million investment deal and is probably going to make use of the cash to develop a motorcycle and different {hardware}.

Biking saves lives: A Massachusetts man who credits bike rides for changing his outlook on life is on a nationwide bike tour to boost consciousness of suicide.

Intentions matter: In a automotive or on a bicycle, practically all street customers break some legal guidelines typically, however current analysis says there are important differences why.

Tour de Tadej: 22-year outdated Slovenian Tadej Pogacar snagged a dramatic Tour de France victory on the penultimate stage and this reflection on CyclingTips does a terrific job capturing why it was so magical and surprising.

The restoration rush: The UK’s bike increase has been met with a commensurate bike theft increase and there’s a growing cadre of vigilantes who revel within the thrill of returning the bikes to their homeowners.

— Jonathan Maus: (503) 706-8804, @jonathan_maus on Twitter and jonathan@bikeportland.org
— Get our headlines delivered to your inbox.
— Assist this impartial group media outlet with a one-time contribution or monthly subscription.